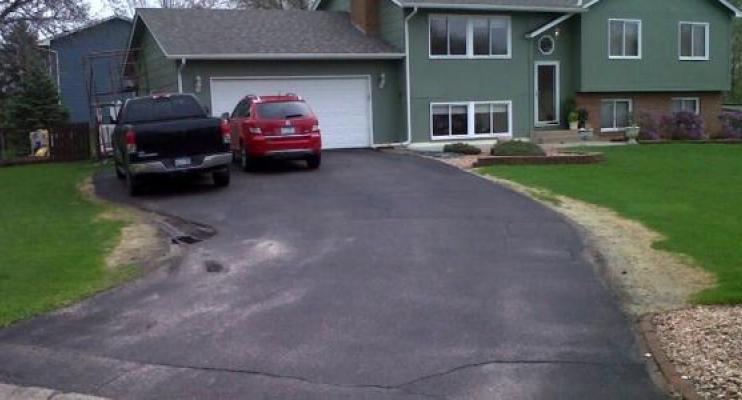 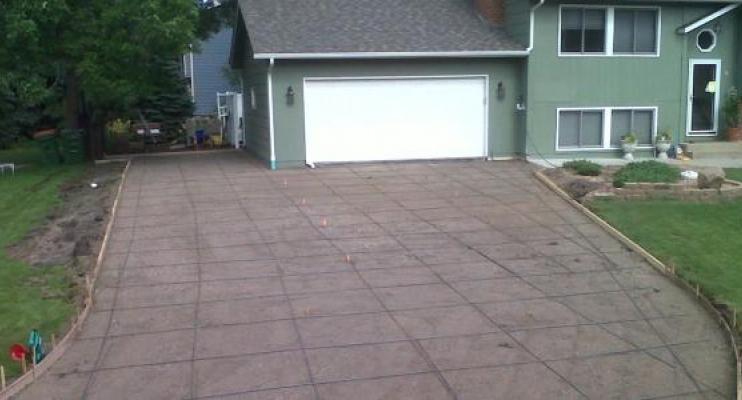 Back in 2009 we installed a stamped and colored concrete patio for Mr. & Mrs. Stuhr. They were so impressed with our work and customer service that they hired us again in 2011 to replace their driveway. They wanted to add an additional parking space next to the garage for their camper to park on and they wanted to enlarge the rest of the driveway because their kids are grown and there just wasn’t enough room for family gatherings. Also, because their driveway was slightly rounded there was an area when they backed their cars down the driveway where they would clip a corner and drive on the grass.

First things first, we pulled a driveway permit from the City of Coon Rapids and scheduled an inspection.

Where the new concrete parking area was to be placed next to the garage the grade of the yard sloped down quickly. We removed the grass and brought in a base material to raise the elevation so the transition of the new driveway would be smooth. At the corner of the garage a gutter down spout came down. We trenched in a pipe so the water would run under the concrete and come out in the yard.

Next the old tar driveway was removed and hauled away. We added base material to the areas where the driveway was to be enlarged and compacted everything. Forms were set up and rebar was laid out. Then the driveway was inspected by the city to make sure we were within city codes. Concrete was then poured and finished. A curing agent was applied to the finished concrete surface to prevent the surface from drying faster than the rest of the concrete.

Black dirt was brought in and spread along the edges of the new driveway and the additional parking space where we had to raise the elevation.

Vehicles need to stay off the new concrete driveway for seven days. After that, the driveway is cured enough to withstand your normal, everyday cars and trucks.

28 days later, we came back and applied a coat of siloxane penetrating sealer to the new concrete driveway. This sealer dries quickly which makes the new driveway usable again after about 45 minutes.

So that’s it. As you can see this is a rather simple process. This was a great project for us and one that we enjoy doing. Please feel free to contact us if you have any questions. If you would like to schedule and estimate please fill out the Request a Quote form and we will contact you shortly.

Have a great day!